Here’s What Graduates Regret The Most About College

Some people graduate college with no regrets, but two-thirds of college graduates aren’t so lucky. For them regret starts to seep in once they’re in the workforce and can last for many years after that. The top regret for college graduates across multiple generations is the amount of student loan debt they take on, according to new research by PayScale.

“College is entrenched as sort of the cultural ideal in our country and everyone wants to do that, thinks it’s the right thing to do, but this is now…at odds with what the practical realities are of landing a job and making enough money,” says PayScale’s director of content marketing Wendy Brown.

Millennials are twice as likely as baby boomers to regret college because of the cost of student loans, 29% vs. 13%. Stagnant pay is another major reason why student debt is the number one regret, according to Brown. In the first quarter of 2019, U.S. workers saw negative real wage growth adjusted for inflation relative to the same time period last year, down 0.8% according to PayScale data.

The other two major regrets of college graduates are their area of study (12.2%) and poor networking (11.2%). Nearly 34% of respondents said they had no regrets. (PayScale surveyed 248,000 people for the report.)

Majors with most regrets

The top three majors with the most regrets are health sciences (37.7%), art (32.1%), and social sciences (30.4%). Health sciences majors often go to medical school to become doctors, Brown says, and “they end up having years of school and years of debt, so our thinking is that that is what added to that number of being a big regret. More loans over a longer period of time.”

According to PayScale, the average starting salary for a job in the field of social sciences is $52,000. 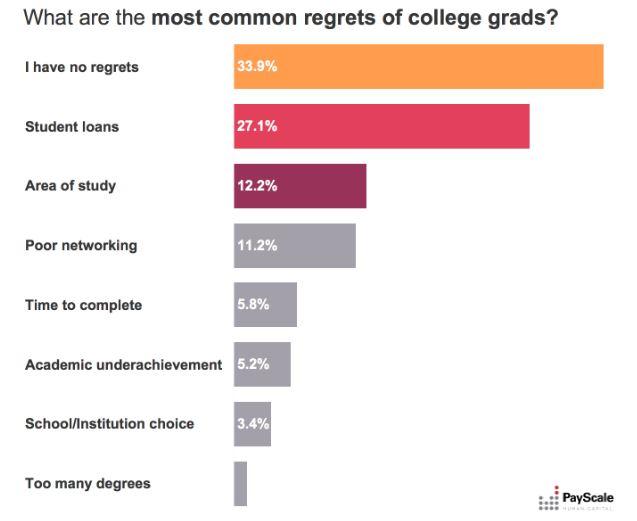 Indeed, data from the Federal Reserve Bank of New York shows that those who majored in arts and social services had among the lowest median wages in their early careers.

The top three majors with the least regrets are engineering (42.2%), education (37.3%), and computer science (34.9%), not surprising given the labor market’s shift to technology-based work. Starting salaries for engineering majors and computer science majors are both more than are $69,000, according to PayScale. (According to a 2018 study by Bankrate, the most valuable college major, based on annual salary, unemployment, and how high a graduate could go without grad school – was actuarial science.)

PayScale found that despite low pay, most education majors don’t regret their field of study. “They’re fulfilled in their jobs based on what we’re seeing with the data, despite the fact that they had student loans,” says Brown.

With nearly half of borrowers still taking on massive amounts of debt without fully understanding the financial burden that awaits them after graduation, it's no wonder that student loan debt ranks as the top regret for graduates.

The country is now facing a $1.5 trillion student loan crisis as outstanding balances have grown by more than 500% since 2003, according to data from the Federal Reserve Bank of New York. This huge debt burden is also a reason why some Democratic candidates are proposing various student-debt forgiveness plans.

Previous: Experts Respond To 5G Radiation Concerns 5G
Next: How Much Money Should You Really Keep In A Checking Account?